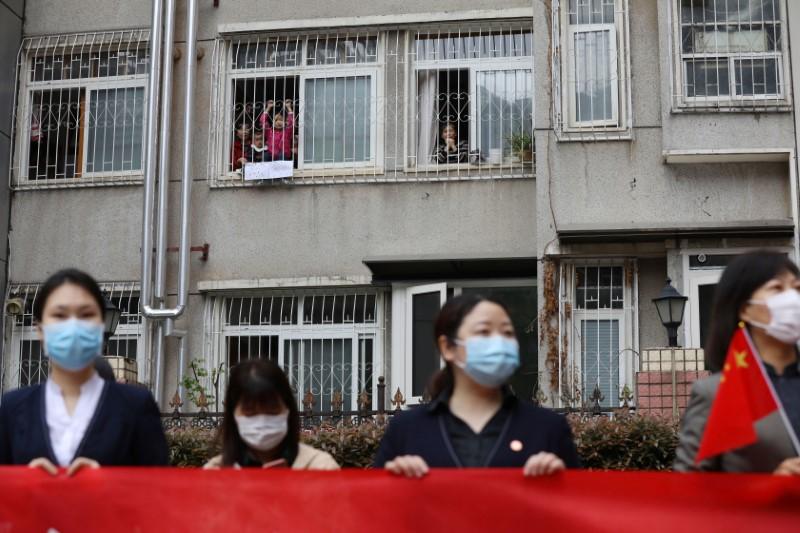 LONDON (Reuters) – Extending school and work closures at the coronavirus’ ground zero in China may delay a second wave of infections, researchers said on Thursday, urging the rest of the world to take note. FILE PHOTO: Residents bid farewell from their homes to a medical team from Guizhou province who is leaving Wuhan, following the novel coronavirus disease (COVID-19) outbreak, in Hubei province, China March 25, 2020. China Daily via REUTERSWith containment measures largely successful and the epidemic’s epicenter now in Europe, China has loosened a two-month lockdown in the city of Wuhan where the new coronavirus is thought to have jumped from wildlife to people late last year. But a study in The Lancet Public Health journal suggested continuing Wuhan’s shutdowns until April would push a potential second wave of COVID-19 – the disease caused by the new virus – until later in the year. That would give health services more time to recover and expand, potentially saving lives. “The city now needs to be really careful to avoid prematurely lifting physical distancing measures, because that could lead to an earlier secondary peak in cases,” said Kiesha Prem, a specialist at the London School of Hygiene & Tropical Medicine (LSHTM), who co-led the research. “If they relax the restrictions gradually, this is likely to both delay and flatten the peak.” The study used mathematical modeling to simulate either extending or relaxing school and workplace closures in Wuhan, a city of 11

million people whose name has become synonymous with the coronavirus for much of the world. By lifting control measures now, a second rush of infections may occur in late August, the analysis suggested. But keeping lockdown measures until April would likely delay a second peak until October — giving healthcare workers a chance to regroup. RESURGENCE FEARS Those findings were “crucial for policy makers everywhere”, said Tim Colbourn, an expert in global health epidemiology at University College London, who was not directly involved in the study. Stunned by the disease’s rapid spread, governments around the world are trying to replicate China’s draconian lockdown measures while also working out the risk of recurrences once the epidemic peaks have passed in their countries. “Our results won’t look exactly the same in another country,” said Yang Liu, an LSHTM expert who also worked on the research. “But we think one thing probably applies everywhere: physical distancing measures are very useful, and we need to carefully adjust their lifting to avoid subsequent waves of infection … If those waves come too quickly, that could overwhelm health systems.” World Health Organization director-general Tedros Adhanom Ghebreyesus on Wednesday expressed the same view, saying lockdowns were the best way to curb transmission. “The last thing any country needs is to open schools and businesses only to be forced to close them again because of a resurgence,” he said. Reporting by Kate Kelland; Additional reporting by Stephanie Nebehay in Geneva; Editing by Andrew Cawthorne
Read More
Advertisement