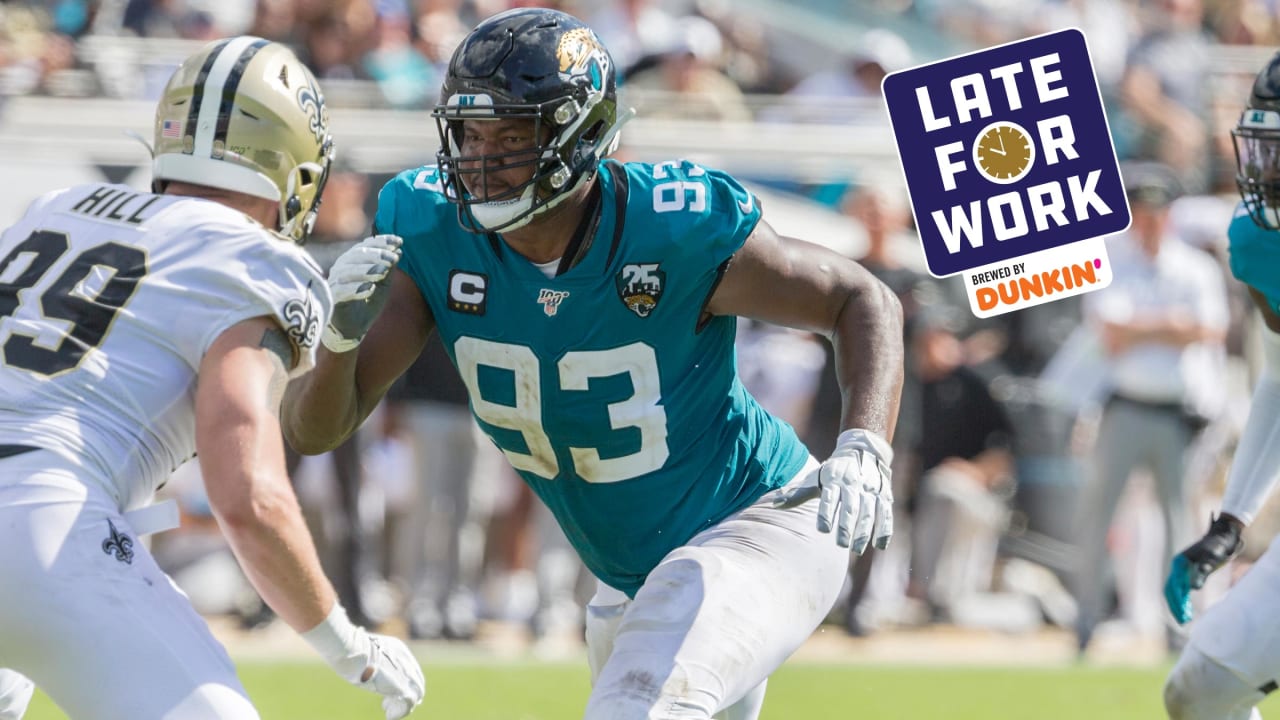 Trading for Calais Campbell Was ‘Perfect’ MoveWith the free agency frenzy having subsided, pundits have come out with their grades for the various moves. The Ravens acquiring defensive end Calais Campbell from the Jacksonville Jaguars for a 2020 fifth-round pick and signing him to a one-year contract extension through 2021 continues to get rave reviews.NFL.com’s Adam Schein placed the move at No. 3 on his list of the most impactful signings or trades this offseason, behind only the Tampa Bay Buccaneers signing Tom Brady and the Arizona Cardinals trading for DeAndre Hopkins.”The perfect player going to the perfect team in the perfect city at the perfect time,” Schein wote. “Campbell is a sensational person and teammate. The five-time Pro Bowler is an excellent, versatile, selfless defensive lineman who makes everyone around him better. What a boost to a unit that already was quite imposing. … Baltimore fans are brilliant. They appreciate great players in the trenches. They are going to adore Campbell.”

NFL.com’s Marc Sessler gave the Ravens an “A” for the trade.

“Consider that Baltimore stole Campbell with a fifth-round pick earned through last season’s trade of prospect-kicker Kaare Vedvik to Minnesota. Now consider what’s left of Jacksonville’s once-proud defense,” Sessler wrote. “We’re looking at two organizations that approach the team-building process from entirely different points of reality.”Pro Football Focus’ Anthony Treash wrote that the Ravens improved their main weakness in a big way — literally and figuratively — by landing the 6-foot-8, 300-pound Campbell.”Sending a fifth-round pick for the second-most valuable defensive lineman since 2016 behind only Aaron Donald? Sign me up,” Treash wrote. “In each of the past four seasons, Campbell has produced elite 90.0-plus PFF grades and was great as both a run-defender and a pass-rusher. Baltimore’s biggest flaw from last year was its defensive front and, specifically, its ability to generate consistent pressure. The Ravens ranked just 27th as a team in PFF pass-rush grade, but with Campbell, it’s a given that’ll be improved on in 2020.”

On a side note, the Ravens earned a B-plus for trading tight end Hayden Hurst and a 2020 fourth-round pick to Atlanta for the Falcons’ 2020 second- and fifth-round picks.Patrick Onwuasor, Josh Bynes Departures Leave Void at Inside LinebackerInside linebacker remains the biggest question mark for the Ravens, and it looks like Patrick Onwuasor and Josh Bynes won’t be returning to provide any answers. One day after Bynes reportedly signed with the Cincinnati Bengals, Onwuasor agreed to a deal with the New York Jets, according to NFL Network’s Rapoport.There was speculation that free agents Bynes and/or Onwuasor, who were part of a three-man rotation at inside linebacker for the Ravens last season, could be re-signed. It turns out L.J. Fort – a midseason acquisition who signed a two-year contract extension in November – will be the only returning regular.

My understanding is Josh Bynes’ 1-year deal with Bengals will be under the amount needed to qualify for comp pick. And sounds like Patrick Onwuasor’s deal w/Jets is borderline. So looks like Ravens either are looking at a 7th-round comp pick or none at all.— Jeff Zrebiec (@jeffzrebiec) March 25, 2020

Bynes, originally signed by the Ravens as an undrafted free agent in 2011, returned to Baltimore in Week 5 last year and played a significant role in the defense’s turnaround. Onwuasor, a starter for the Ravens at weakside linebacker in 2017 and 2018, struggled early in 2019 after moving to middle linebacker to replace C.J. Mosley.In addition to Fort, the Ravens have Chris Board and Otaro Alaka,

who are both young and unproven, at inside linebacker.

“The Ravens can still address the position through the draft, and they’ve shown they don’t need an every-down player in the middle of the defense to serve as anchor,” Penn Live’s Aaron Kasinitz wrote. “Down the stretch of last season, safety Chuck Clark wore the communication device to relay play calls and often moved into the box as a de facto linebacker.
“With Clark still in the fold, Baltimore might not view inside linebacker as a huge priority. But as Onwuasor prepares to begin anew with the Jets, the Ravens still must decide how to fill out their linebacking rotation.”

Positions the Ravens Should Stock Up OnRavens Wire’s Matthew Stevens noted that the Ravens have done a good job throughout their history of keeping their eye on the future in addition to addressing their immediate needs. With that in mind, Stevens identified six positions the Ravens should stock up on.Here are some excerpts:
Running back: “With such a run-heavy offense, keeping a steady flow of talent at running back will allow the Ravens to keep chugging forward for even more years.”Safety: “While they have Chuck Clark signed to a three-year extension and Earl Thomas III signed through 2022, there isn’t much depth behind them. … Thomas will turn 31 years old in just a few months and has already played 10 years in the NFL. As we’ve seen far too often in football, guys can suddenly drop off physically and be a shadow of their former selves, meaning a clock is constantly ticking here for the Ravens.”Cornerback: “Even with two Pro Bowl starters in Marlon Humphrey and Marcus Peters as well as Tavon Young on the inside, Baltimore has learned to not rest on their laurels when it comes to their secondary.”Defensive line: “For all the help the Ravens added to their defensive line this offseason, none of their signings and trades were long-term options. … It’s clear Baltimore wants a stout defensive line and they’ve got it — for now. Finding some guys that can step into starting roles in two years would help them transition a lot easier and smoother.”Outside linebacker: “This is both an immediate need and a long-term one for the Ravens. But even in the best-case scenario where Baltimore is able to sign Matthew Judon to a contract extension and grab an immediate starting outside linebacker in the 2020 NFL Draft, they still need to think about the future and more depth.”
Tight end: “With the trade of Hayden Hurst, this is also one of the team’s lesser immediate needs as well. But if they kept an eye towards the future and picked up a developmental prospect who could potentially replace either Nick Boyle or Mark Andrews in the next few years, that wouldn’t be a bad idea either.”

Punter Sam Koch on signing two-year extension to extend his 14-year run with #Ravens: “To have the type of people that surround me and my family like they do there at the facility, it’s very fortunate, and I don’t take it for granted.” More from Koch: https://t.co/xASsPEZDtK— PressBox (@PressBoxOnline) March 24, 2020

That’s a pleasant surprise for the Ravens, who (finally) get a 6th round 2021 compensatory pick on the board.Couldn’t keep the DeCosta/Newsome front office off there too long. https://t.co/MR40cKSK5o— Nick Korte (@nickkorte) March 26, 2020