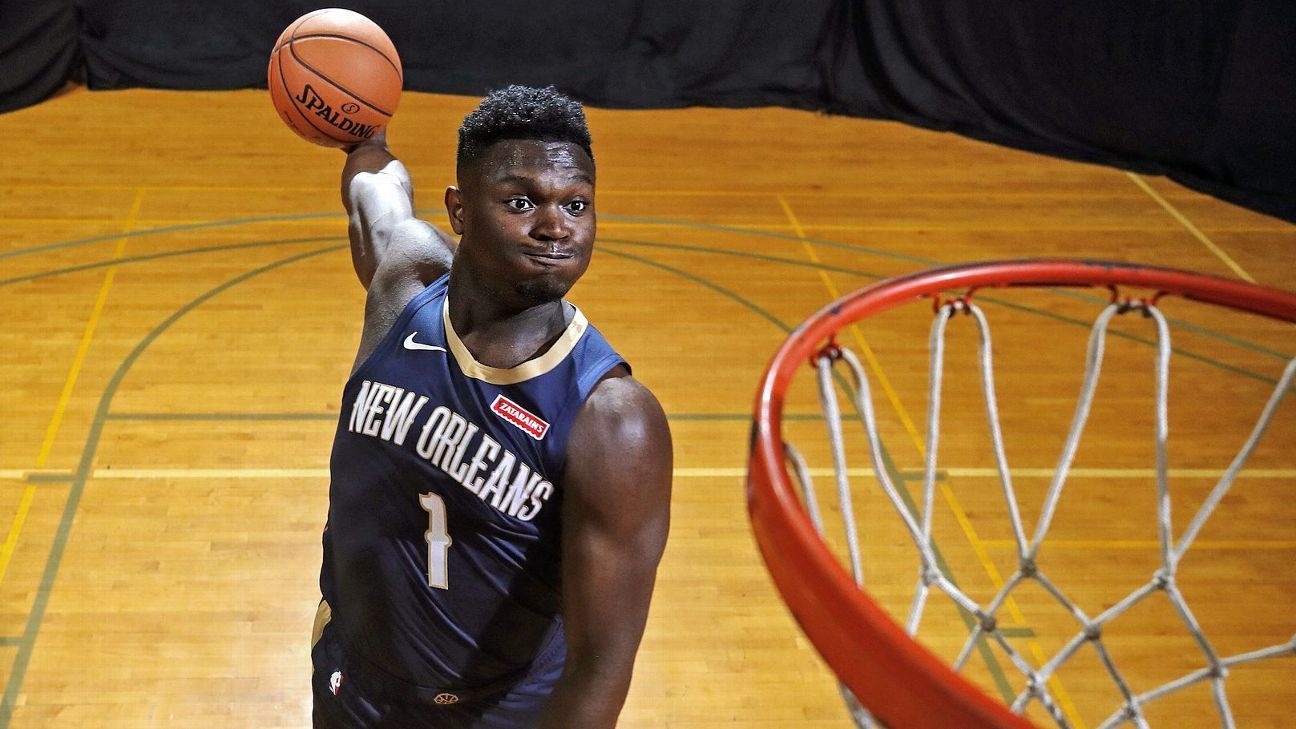 landing from a jump using the hips.The fourth factor, though, could determine the fate for the most exciting NBA prospect in a decade: mass.What they found had defied conventional wisdom: mass has no independent relationship to risk of injury. Rather, it serves as a multiplier for the other three factors. So when Zion Williamson told ESPN on Dec. 25 that the Pelicans were tweaking how he walks and runs, the aim was to manage the first three variables in order to control for the fourth.”If Zion’s mechanics are clean,” Elliott says, “then I’ll take him all day with his weight.”Veteran NBA trainers say today’s young players often have stiff and inflexible hips that keep them from squatting and hinder their lateral movement — and league sources say these issues also affect Williamson. But Griffin reports progress on Williamson’s ability to get low to the ground and move laterally.These are the sorts of issues that the Pelicans would have always focused on with Williamson, Griffin says, but his monthslong rehabilitation from knee surgery has given the team and 2019 No. 1 pick time to focus on them and little else. Griffin is hopeful that the injury will, in time, be something that everyone looks back on as a “blessing in disguise.”Specialists at P3 and elsewhere note that it’s easier to repair such issues in younger players than older ones. One veteran Western Conference scout says recent reports for prospects have often included the phrase “tight hips.””At first, I would kind of laugh at it,” the scout says. “But now I notice it more and more often, especially when they move laterally while defending. A lot of these guys can’t get low to the ground.”Griffin says the team has a checklist of assessments — the particulars of which he declined to share — that Williamson must pass in order to play. But Griffin acknowledges that the key for Williamson’s longevity will be all about “his brakes,” his lower extremities, and that as the team works to maintain them, it’s important for Williamson to become adjusted, acclimated and comfortable.”They have a lot of work ahead of them,” one Western Conference NBA athletic trainer says of the Pelicans. “It’s not their fault, [but] I don’t think it’s going to be super easy.”IT’S 30 MINUTES to tipoff on Nov. 24, and the Pelicans are in town to face the Clippers for their 17th game of the 2019-20 season. And Zion Williamson has played exactly zero minutes in any of them. New Orleans is a disappointing 6-10.Griffin, in a suit and tie and standing off to the side of the court during warm-ups, is talking about his prized rookie and the narratives that have hovered around him since the summer: Zion is in poor condition. He weighs too much. He’s too explosive. That’s why he’s injured.Griffin hasn’t been shy about fighting back, calling such theories “asinine” in October when he cited Williamson’s strong preseason, in which he averaged 23.3 points and 6.5 rebounds in four games. Here, Griffin calls Williamson a “freak of nature” and notes that when he went through his physical with the Pelicans, “he ran on the treadmill longer than the cardio-stress test people have ever needed to put anybody through a test to get his heart rate up.”Says Griffin: “Our challenge with Zion is: How do you continue to give him enough strength to control the torque he generates without adding weight that increases the torque in and of itself — giving him the ability to be flexible enough and to have the right mechanics, and supporting that flexibility with the strength that it takes to control it in the form of a kid who adds muscle mass as fast as any human being I’ve ever seen.” Which, to put it that way, does sound like quite a challenge — or at least a mouthful.Then Griffin shares another story about Williamson — how the Pelicans engaged in a teamwide heavy weightlifting routine for just one week during the offseason. Williamson gained eight pounds of muscle during that span, a degree of weight gain that shocked staffers.”He’s not normal,” Griffin says. “So finding stasis with Zion is the challenge, because he’s 19 years old. He’s still growing. It’s not going to be about a number. It’s going to be about metrics of flexibility and strength and control and all of the different things that we can measure that really are outside of weight.”One NBA athletic trainer who is familiar with Williamson agrees.”If you’re not moving well, I don’t care if you’re 300 pounds or if you’re 175 pounds, there’s going to be a problem,” the trainer says. “It’s got to be quality movement. The mechanics have to be done right.”Leading the Pelicans in their care of Williamson is Aaron Nelson, whom they hired in May as their vice president of player care and performance. Nelson spent the previous 26 years with the Phoenix Suns’ vaunted training staff. With Nelson, the Suns were pioneers in movement efficiency, helping revive and maintain the careers of Grant Hill, Steve Nash, Amar’e Stoudemire and others.”Aaron Nelson has been with all of the best that have ever done this,” Griffin says. “He’s added years to everybody else’s career. They’ll figure it out.”Griffin says later, “Aaron isn’t learning anything he didn’t know. Still, he’s never seen anybody who can generate what [Williamson] can generate. … He’s a 280-pound triple-jumper. It’s crazy.”And so the anticipation for Williamson’s debut builds as it does whenever he explodes toward the basket, testing Newton’s laws as he rises higher than physics suggests anyone of his size ever should. Cameras aim, crowds grow, hope swells — but concern lingers.So while the Pelicans preach patience and a fundamental approach, they know there is no fair template — because there’s never truly been anyone quite like Zion Williamson.